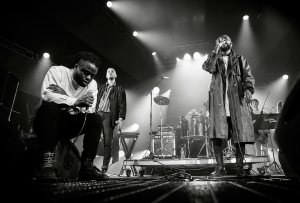 Can we forget about the Mercury? Probably not but I fear this may descend into a critique of the Mercury decision rather than critique of a piece of music. Anyway, let’s have a roll and see how this works out?

For me, this is an album of 11x 3 min pop tracks (no song under 2 min 50, none over 3 min 51). I am sure we will debate the word ‘pop’ as I think at least one of us will struggle with that definition? I would argue that you can’t have as many hooks in one album of 3 min tracks and it not be a ‘pop’ album.  It doesn’t matter  that the group choose to deliberately sabotage their own ‘pop’ credentials in dark, dystopian, discordant, choral chants, nose-diving bass lines and berating beats.

This isn’t easy listening. Having said that I found it effortless to get into (not bragging I just think this ticks loads of my boxes). But I understand that most people find the opposite to be true. I’ve recently gone back (album released in Jan 2014) and read loads of reviews of this album and most say that it is difficult to penetrate but massively rewarding when you do. I always bang on about ‘when’ I can listen to music and this is a distracting listen that really requires you to engage in its finer points. Background music this is not. Tunes to play while working? Nope. Driving, public transport etc, Yep. I listen to it most when training.

Much has been made about the multi-cultural make up of the band which all feels a little ‘Mercury’ to me until you start listening to the lyrics and picking through the subject matter.  ‘Ak47 take my brethren straight to heaven’ is pure hip hop cliche in an LA accent but it appears more impactful and evocative in an African (Young Fathers = Liberian, Nigerian. Scottish) accent and preceded by the imagery conjured up in the opening verses of ‘No Way’, the albums opening track. If you like this album then I would suggest spending some time with the lyrics of these tracks.

I think this album avoids the ‘worthiness’ which it could have created with its multi-ethnic (Scottish included) influences and a lyrical topics. It feels like all of the constituent parts (ethnic background: check / socially conscious lyrics: check / eclectic influences: check) make for a cliche-ridden horror show but at each opportunity to fall into that hipster trap is swerves either lyrically or sonically and avoids the cliche. As if sat in the studio they felt it a track was getting a bit too nice so they chucked in a massive tribal rhythm and discordant drone to scare off the ‘wrong crowd’.

Who does this sound like? Anti-Pop Consortium, TV on the Radio, Shabazz Palaces, New Flesh, Saul Williams … New Fathers?As mentioned before this ticks loads of my boxes and I love all of the artists listed above (Shabazz excluded – sorry David may be I need to try that one again?).

So, similar to FKA Twigs, at the point of winning the Mercury, they’d only sold 3,000 units. Its now at least 3,004. But does this matter? Sales does not correlate to quality. Just look at the Cinema Box Office.