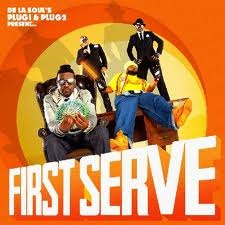 So brothers, I present to you a hip hop concept album. Now before you get it in your head, Kanye’s 808’s wasn’t concept, it was experimental; two VERY different things.

I must admit when I read about this album I left it alone. I don’t generally like concept albums because they rarely stick to the concept.. they become experimental, or are a compilation with in between links (Handsome Boy Modeling School). More – so a hip hop concept album? The thing is that actually many artists have done concept albums; first to mind for me is Scarface – The Diary.  More recently there is no better example than Plan B – Striktland Banks which pushed the concept to the max. So it can happen, some good and bad.

I digress; let’s talk about ‘First Serve’. I like this for so many reasons. You’re not going to be blown away, this is De La through and through. This isn’t a good thing, it’s a great thing.

The best way to do this for me is point form. I like this album because….

– Plug One and Two do what they maybe did on one or two songs an album traditionally; made party joints and told a story at the same time (think ‘It Aint All Good’)

– They stick to their story the whole way through and actualy show and interesting beginning, middle and end.

– The album makes me dance, has catchy lyrics but still gets you into the story.

The reason that this isn’t a De La album is that it’s the brain chils of another producer. I like that fact. I’m glad they’ve done this album but not as De La Soul. Enough can’t be spoken about having an alias. They have got to do this with this album.

When listening, give it a couple listens, some tracks are more and club radio than others. All are very catchy.  The interlude’s are important to the story (some very funny) and keep it all consistant.

I’m so looking forward to more De La Soul hip hop, but I do hope First Serve get a guest spot on a track or two.

It took me a few months to buy but I’m happy that this album is in my life and I hope you feel the same.